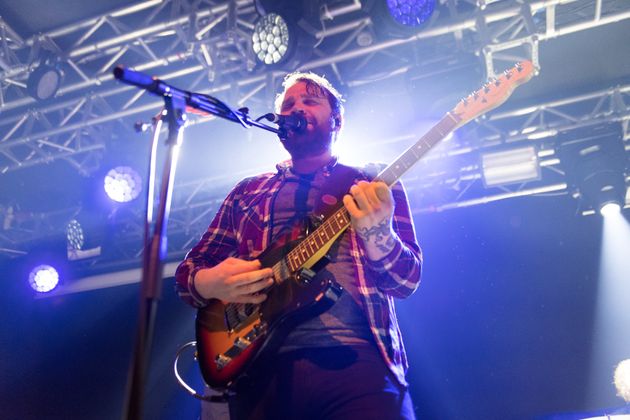 Like many other fans, the music of Scott Hutchison and his band Frightened Rabbit has been a crucial companion to me over the last decade. The news of his death on Friday has been hard to bear. Gone is one of the finest songwriters of a generation, who both articulated and soothed the experiences of countless listeners struggling with mental illnesses, unrequited love, and simply finding ways to cope.

It was Frightened Rabbit’s 2008 masterpiece The Midnight Organ Fight that first exposed me to Hutchison’s brilliance. A mix of indie rock rousers and tender soulful ballads, the album is made by Hutchison’s raw Glaswegian voice, shot through with masculine vulnerability as if it could break at any moment. The unvarnished outbursts of heartbreak, loneliness, alcoholism, depression – all tempered with moments of redemption – pierced me deeply.

For fans of The Midnight Organ Fight, Hutchison’s death has a tragic rhyme. In the album’s penultimate track, Floating in the Forth, Hutchison fantasises about taking his own life by jumping from the Forth bridge – “And fully clothed, I float away / Down the Forth into the sea” – before finding the reasons to think again, announcing in what became a rallying cry at the band’s gigs that “I think I’ll save suicide for another year.” Hutchison was last seen in a hotel only spitting distance from the Forth, with his body discovered on the river’s banks.

I first listened to Frightened Rabbit in my late teens, and Hutchison’s lyrics in The Midnight Organ Fight found often stark ways to explain things that I didn’t understand. Poke told of the grimness of a relationship on its last legs, asking “why won’t our love keel over as it chokes on a bone?”, while Keep Yourself Warm articulated the loneliness that can follow the eventual end: “it takes more than fucking someone / to keep yourself warm.”

Gone is one of the finest songwriters of a generation, who both articulated and soothed the experiences of countless listeners struggling with mental illnesses, unrequited love, and simply finding ways to cope

Also revealed with frank honesty was the self-loathing of hurting a loved one, Hutchison pondering in The Modern Leper why “I crippled your heart a hundred times / And still can’t work out why” before declaring, accusingly, that “You must be a masochist / To love a modern leper on his last leg.” Each song revealed something new and true about loving and being loved and just how chaotic both can be, while never falling into self-absorption or self-pity.

Where The Midnight Organ Fight departs from the admittedly many albums charting love, loss, and mental illness, however, is in Hutchison’s ability to articulate the small pools of hope that can shine through the muck. In My Backward Walk, he sings that “I’m working on my faults and cracks / Filling in the blanks and gaps”; self-improvement providing the means to temper depression and heartbreak’s demons. In The Twist’, meanwhile, Hutchison finds comfort in endings not being definitive, there always being something to cling to: “And you know when it’s all gone / Something carries on.”

Each year, my Dad spends countless nights cooped away at his computer searching for the best and most obscure Christmas songs, which he then releases in a December compilation – his own quiet ‘fuck you’ to the ubiquitous jingles that dominate the shops and adverts. Central to the project is a conviction that the darker sides of the season – the melancholy, the longing for lost ones, the rough need to put on a brave face for the sake of others – gets insidiously ignored by an insistence on the unrelenting happiness of Christmas.

The best song he has ever included is Frightened Rabbit’s It’s Christmas So We’ll Stop, released as a standalone single the year before The Midnight Organ Fight arrived. While lesser-known, it is the finest example of Hutchison’s ability to combine love, pain, hope, and its ultimate futility.

Pleading “Let the rot stop just for one day”, Hutchison sees in Christmas the chance for renewal; a respite for a failing relationship and sense of self-worth. Christmas offers “the perfect excuse for our natures to change / and wear shiny clothes”, with the promise that “the rest of our lives will be just like Christmas / With fewer toys.” Yet despite this vow, Hutchison finds that the redemptive possibility of Christmas is fleeting, and inevitably evanesces when “The next day life went back to its bad self”.

While Hutchison’s death might seem to show to some the hopelessness of hope, I will still find in his music the belief that small coincidences, happenings, and actions can give reasons to wade through the “shit I’m knee-deep in” that he describes in My Backward Walk.

In the days since Hutchison went missing, fans have flooded social media to well-wish and describe how his music has helped during difficult times. One man told of how, “when I felt I couldn’t stick in any more”, Hutchison’s lyrics had motivated him to pull through. In The Midnight Organ Fight’s ‘Head Rolls Off’, Hutchison determined that “while I’m alive, I’ll make tiny changes to earth”. He unquestionably succeeded, and will continue to do so in spite of his tragic passing.