First, there was the game-changing sausage roll. Next, the Quorn-based ‘steak’ bake. Now, Greggs has added another vegan alternative to its menu: the Vegan Sausage, Bean and CheeZe Melt.

Available in 2,000 shops nationwide, the new product is designed to mirror the traditional, meat-filled Sausage, Bean and Cheese Melt, or SBCM, as it’s known among die-hard fans.

The vegan-friendly version is wrapped in layers of vegan puff pastry, but instead of the classic filling, it contains vegan sausage, baked beans and grated original and mozzarella flavour vegan cheeZe (yes, you have to spell it with a giant ‘Z’).

Customers queued round the block for Greggs’ previous vegan releases, so it’s no wonder the retailer is running with a theme.

Where other high street bakeries have struggled, Greggs has managed to bounce back from a tough 18 months, with profits now outstripping pre-pandemic levels. Can this £1.60 beanie bake help keep Greggs in the black?

We tried it to find out. 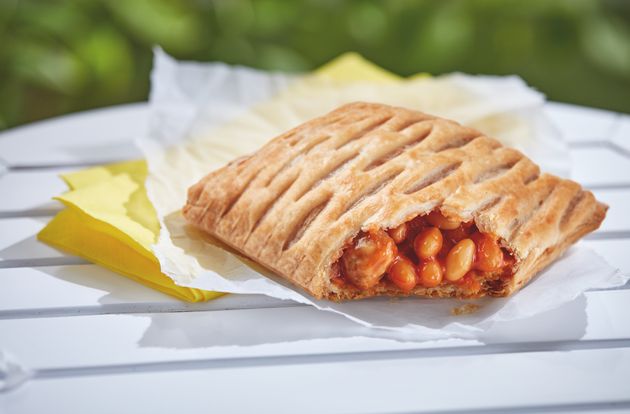 “My hopes are very high with Greggs’ new vegan sausage, bean and cheese melt. The last time I tried a new vegan item – the famous sausage roll – it had healing powers. I was sick at the time it was launched but the sausage roll was the only thing I could stomach. I got better after eating it. See, healing powers. So I was expecting the same kind of magic from this one.

“Unfortunately, it falls a bit flat. The beans feel too tomatoey and runny, it overpowers the rest of the flavours – but the sausage and pastry do satisfy. It looks and smells the same as other Greggs items, and has the crumbliness of them too, so maybe don’t eat it over your laptop.

“Though I don’t love this one as much as I like the other vegan products at Greggs, I am glad they’re continuing down this route. As I follow a halal diet, I can’t eat their sausage roll, steak bakes and melts. But the vegan offering changes all that.”

“My breakfast routine usually consists of tea and something sugary, so it’s safe to say I’d never normally pick up a giant savoury square pre-10am.

“I’ve got to hand it to Greggs though, the chefs have nailed the pastry – it’s buttery in texture, golden in appearance and you’d have no idea it was vegan unless someone pointed it out. Unfortunately, things go downhill once you bite into it; the filling is disappointing, mainly because there isn’t enough of it.

“The vegan sausage is almost entirely absent and the cheese is so mild, you can’t taste it. Inside the largely hollow shell, the dominant flavour is beans. I like beans, but would I buy a plain old ‘Bean Melt’? No, I would not.” 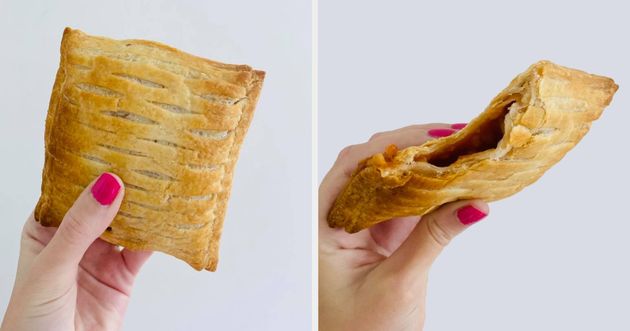 “Despite being a carb fiend, I’ve never really got into Greggs, I think because I prefer my starch in potato, rice or pasta form, rather than pastries and pies. Still, I’m not going to turn down a free meal, and this melt is certainly that: proteinous, despite its plant-based credentials.

“Biting in, I can taste all the different elements we’re promised even if I can’t see them – the filling has that unmistakeable pinky-red hue of baked beans which makes me feel a bit queasy. But neither the ‘sausage’ chunks or ‘cheeZe’ give me the ick that I often get from vegan substitutes, and the pastry square pretty much holds its shape, making it easy to eat on the go – or who am I kidding? – at my work-from-home desk. I’m left full, if craving some greens. I still don’t get the Greggs hype, but this melt is my type. Yes, I’m surprised too.”

“As a certified Greggs fan I’m so excited that they’ve extended their vegan line. Though I’m not vegan per se, it’s nice to know that there’s a healthier alternative available. I grew up on Greggs and my fondest memories have been getting a sausage roll in the morning with my mum.

“The presentation of the sausage, bean and cheese melt is perfect, but I expect nothing less from Greggs. It’s golden and crispy. I’m shocked these are even vegan because I expected it to taste bland, but it’s quite the opposite. The filling really is flavourful and I can taste all the elements coming through. The nice surprise is how I feel after eating it. Even though I’m full, I still feel light because it isn’t too heavy on the stomach.”