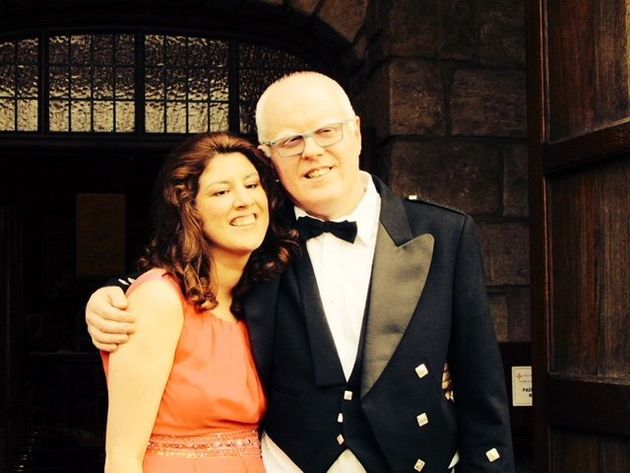 Like many couples, not long after we got together, we found ourselves having that inevitable conversation – ‘So, how do you feel about having children?’

As is the case with many commitment shy blokes in their 30s, I tried to avoid answering the question at first but it quickly became clear that we both wanted two children, if possible.

Often late at night, we would quiz each other about the practicalities. How would we cope if our toddler escaped? What if the baby was sick and we needed to give medication?

Not driving and getting around were obvious issues. But those were just practicalities. All the way through our lives, we had both been doggedly determined and constantly keen to find ways around obstacles that appeared to be blocking our paths.

We also figured that if our child had a visual impairment, then we would be well placed to support them.

We went through the motions of genetic counselling to be told that we were unlikely to have a child with a visual impairment – but to be honest we had already made the decision to go ahead and soon after we became pregnant with our first child.

Almost ten years after getting together, Tadhg arrived into the world to the soundtrack of ‘I Believe I Can Fly’ by R Kelly.

Suddenly, all of those late-night questions made sense. Being in charge of a tiny human was every bit as challenging as we had imagined, and then some.

The early days at home with our new baby were genuinely quite stressful. Firstly this was about the obvious adaptation to parenthood. Secondly, he was a tricky baby due to allergies and a case of silent reflux. Thirdly, we needed to find nonvisual ways of doing certain things.

Up until this point, we both had endless workarounds and strategies for child free life, but for the first time, a little person was entirely dependent upon us.

Like many new parents, we found ourselves asking questions like, should we have gone ahead with children? Were we up to the job? Being visually impaired meant that we felt much more under the microscope. How were we going to quell the nosiness of sighted onlookers?

The passage of time and positive experiences in those early days allows you to quickly park those questions raised by the monkey on your shoulder.

Of course you should have gone ahead and become a parent, that’s what people do. Why on earth should your visual impairment have any impact on your ability to be a good parent?

Fast forward nearly three years and little Arlo arrived into our world. Now we had a toddler and a newborn baby.

Some of the challenges we had to think about as visually impaired parents included: How will we get them from A to B? How on earth will we handle medication when they’re ill? And at the most basic level, how will we know where they are?

First up we needed to find a buggy that worked for both of us. We chose a brightly coloured but very cool looking one with a flip handle. This meant I could easily pick it out in a crowded place and also that Emma could use it while working with a guide dog.

If you’re fully sighted, pushing a pram in front of you allows you to see your baby all times, Emma can’t do that, so instead she mostly carries the baby on her front in a sling. This allows her to always know what’s going on with baby.

Thinking back to our initial question about the toddler escaping, a handy little backpack with a strap which mum or dad can hold works well for us.

Managing medication is made much easier by marking a groove on the inside shaft of a syringe. When measuring out a 2.5 ml dose of medication, Emma simply lines up the groove on the inner shaft of the 5ml syringe with the outer lip. Knowing your Calpol from your ibuprofen is made easier through Braille and large print labels.

Easy to see, brightly coloured clothing helps me to spot our toddler in a playground. At the crawling stage, Emma put a bell on the back of Tadhg’s top.

We haven’t come up with all of those hacks by ourselves. Talking to and learning from blind and partially sighted parents has been invaluable. Groups like Blind Mums Connect for example have been a fantastic source of information and support.

More information on resources for blind and partially sighted parents can be found on the RNIB website (Royal National Institute of Blind People).