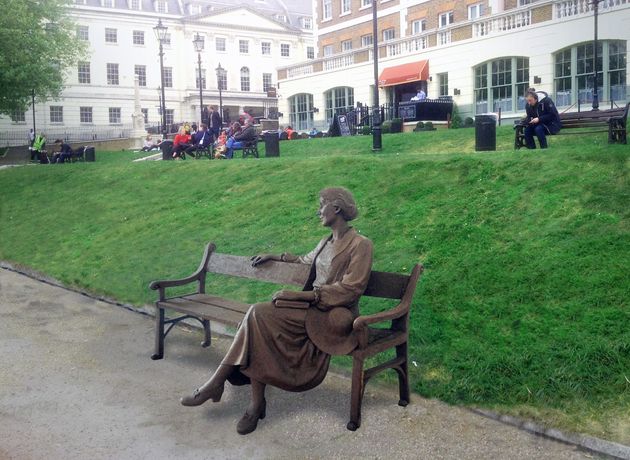 A campaign for the first life-size bronze statue of the writer Virginia Woolf has been given full planning permission by Richmond Council, after 83% of Richmond residents who responded to a public consultation backed the sculpture. Aurora Metro, the arts and education charity behind the project, believes that a full-size statue of the writer is long overdue. “As James Joyce, the other leading Modernist writer has long had a full-size statue in Dublin, it’s time that we honoured Virginia Woolf’s contribution not only to English literature but also to the on-going debate concerning female equality.” says Cheryl Robson, director of the charity.

While commonly associated with Bloomsbury, Woolf and her husband Leonard spent ten years living in Richmond. Due to the distractions in London, Leonard decided that a move out of the city was best for Virginia’s fragile health, and Richmond, with its leafy parks, more sedate life and access to the Thames, was seen as ideal. After lodging at 17, The Green, the couple moved into Hogarth House on Paradise Road early in 1915. Immediately taken with the house, Virginia described it as ‘the loveliest house in England.’ It was during their time in Richmond that they acquired a printing press, and the Hogarth Press was born in the house from where the name originated. This endeavour, originally intended as a hobby for Virginia, grew tremendously. In the time the couple lived in Richmond, they had published 32 books and pamphlets, including works by E.M. Forster, T.S. Eliot and Tolstoy.

Their first publication, however, was Two Stories in 1917, which included a story each by Virginia and Leonard. In 2017, to celebrate the centenary of the Hogarth Press, Two Stories was reissued incorporating Virginia’s story and a new tale by Mark Haddon (The Curious Incident of the Dog in the Night Time). The ten-year period in Richmond was prolific for Virginia the writer. She completed and published Night and Day, Monday or Tuesday and Jacob’s Room, as well as numerous essays and short stories, including Kew Gardens in 1919, taking inspiration from the nearby attraction. She was also working on The Common Reader and Mrs Dalloway, which were both published in 1925, a year after the couple left Richmond. This period in the town was integral to Woolf’s development as a writer, as she really started experimenting with the form of the novel, even describing Jacob’s Room as her favourite of the books she had written. 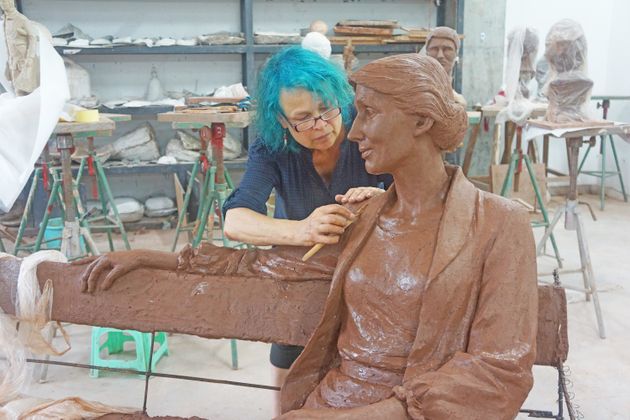 The acclaimed sculptor, Laury Dizengremel, whose previous work includes a statue in Hammersmith of Lancelot ‘Capability’ Brown, has been commissioned to create the statue. The piece will feature Woolf in repose on a bench, where people can sit next to her in lively conversation, while enjoying the Richmond riverside. Dizengremel was asked to portray the writer in a happy state of mind, due to the many photographs of the author demonstrating similar expressions, stating: “Being asked to create the first ever full figure statue of Virginia Woolf, and to portray her happy side was a total thrill.” The statue campaign has the support of Virginia’s great niece, the author Henrietta Garnett, who says: “The statue bears a remarkable resemblance to my great aunt. It’s a wonderful idea to put it in Richmond where she spent 10 years of her life.”

In the year that the Suffragist, Millicent Fawcett, was commemorated with a statue in Parliament Square in London and 100 years since some women were first given the vote, the call for more women to be honoured in sculpture form is louder than ever. With only a bust in Tavistock Square and another in the garden at Monk’s House in Rodmell, it is about time that Virginia Woolf was remembered with a life-size bronze statue in the town where the Hogarth Press was started. The life of Virginia Woolf adds to the rich cultural history of Richmond: the Blue Plaque on the side of Hogarth House commemorates her residence, but her legacy to literature demands a more interactive memorial, and what is better than to sit next to her, admiring what she once termed ‘her river’?

Now that full planning permission has been granted, Aurora Metro needs to raise the required £50,000 for the statue to become a reality. The charity has a fundraising page, as well as a campaign video here. You can follow the progress on Facebook at @VirginiaWoolfStatue and Twitter at @VWoolfStatue and join people like Neil Gaiman in lending your support to the campaign.

The last words, should of course, be left to Virginia describing Richmond: “Nowhere else could we have started the Hogarth Press, whose very awkward beginning had rise in this very room, on this very green carpet.”