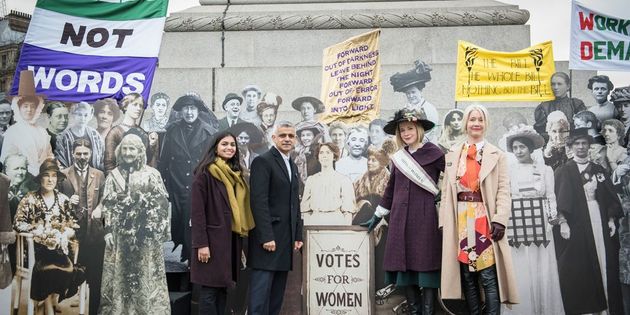 I used to think that we’d come a long way, that the Suffrage movement got the vote a century ago and then that the first wave of feminists in the 1800s had sorted it, right? I thought we could settle in, confident in the knowledge that if we worked hard and were nice to people we’d be rewarded with jobs and promotions as appropriate. Pah!

In fact, we’ve barely scratched the surface, let alone cracked the glass ceiling. Take the gender pay gap in London – between 1997 and 2017 it only closed by 0.5 per cent. This glacial rate of change makes the 50 years it took to get the vote look like fast tracking.

The Fawcett Society’s recent Sex and Power report revealed leadership roles across every sector of our society are dominated by men. How did that happen? This is also true of the creative industries. The Association of British Orchestras revealed that just 5.5 per cent of conductors represented by classical music management companies were women, and the report from the Fawcett Society also showed that only 16 per cent of British Film Directors were women.

It is dispiriting reading looking at these figures, when we know that diversity, particularly at the leadership level, benefits everyone. Research from PricewaterhouseCoopers (PwC) has shown that across the world, 85 per cent of CEOs whose companies have a formal diversity and inclusiveness strategy have said it has improved their bottom line.

With figures this stark, we have to reflect on why we have failed to put this right. We need to get a move on, and turbo-charge our approach to proper gender equality.

In the suffragette spirit of ‘Deeds Not Words’, our proud feminist Mayor of London, Sadiq Khan, is on the case with a new initiative. It will tackle the lack of women in leadership roles and call on all industries to take the decisive steps needed. The new scheme, ‘Our Time: Supporting Future Leaders’ is the first and largest scale intervention of its kind in the public sector.

It is about more than mentoring. Whilst a mentor can be invaluable, Our Time is much more pro-active. It will pair talented women with senior staff champions (men and women) who will open-up the professional networks, opportunities and contacts needed to achieve leadership roles.

Because we need to do more and work faster to reduce the gender imbalance in leadership roles, bridge the gender pay gap and address the structural barriers that hold talented women back.

Looking at some of the leading lights of the creative industries, bold, innovative and talented women have already shown us the way. There are so many people who inspire me. From the late architect Zaha Hadid, who designed the Olympic aquatics centre in London and was the first woman to receive the Pritzker Architecture Prize, to Vivienne Westwood – a pioneering designer and campaigner. But still, all too often, these women are the exception not the rule.

One hundred years ago women advocated, campaigned and fought bravely against a system that denied them their fundamental democratic rights, and the Mayor’s campaign #BehindEveryGreatCity celebrates this landmark centenary year. It is a call for action to make gender equality a reality. We have already transformed Parliament Square from a male-only line-up of statues, unveiling the first statue of a woman – suffragist Millicent Fawcett.

The tide is turning, but not fast enough. Today I want to call on the creative industries in London – and beyond – to join us in our efforts to turbo-charge our journey to gender equality. To sign up to ‘Our Time’ because as the phrase goes – ‘you can’t be it, if you can‘t see it’. We need to see women in positions of power, leading our industries and public services. We need to inspire the next generation of young women and girls – and continue the brilliant work the suffragists and suffragettes started over a century ago.