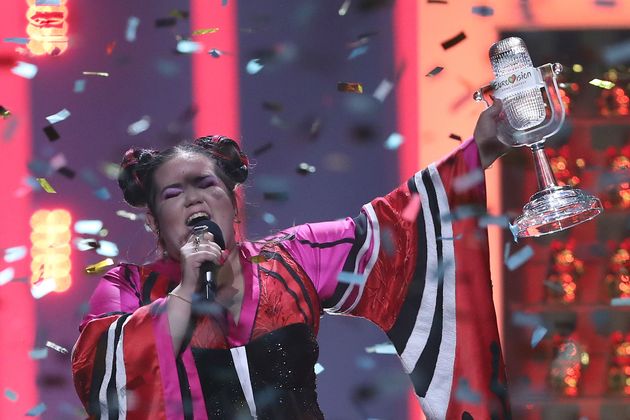 Israel’s stunning win in Eurovision’s nail-biting final was a victory for diversity. In a night of high camp and high drama, the complex voting system took the result to the wire, coming down to two female performers whose style and ethos were poles apart.

Bookies’ favourite Eleni Foureira, representing Cyprus, rocked enormous hair on a tiny body, clad in spangles and dropping moves that looked straight from a Pussycat Dolls video. Her song, Fuego, was a highly polished pop performance, a cross between Beyoncé and Shakira, sprinkled with the hair-whipping action of Willow Smith.

And then there was Netta from Israel: big, beautiful, and unapologetic. Clad in a kimono-esque outfit and channeling Björk to the max, her voice shook the stadium as she belted out “I’M NOT YOUR TOY!” and made whoops and chicken noises in front of a coterie of maneki-neko Japanese waving cats.

Yet the night had at first been dominated by egotistical males with questionable lyrics. There was cheesy winker Benjamin Ingrosso, Sweden’s answer to Gaston from Beauty and the Beast, offering to “Dance you off” (no thanks); then there was Mikolas “I know you ‘bop-whop-a-lu bop’ on his wood bamboo” Josef of the Czech Republic, whose toe-curling effort as a Bruno Mars impersonator was like watching Jacob-Rees Mogg rap at a Conservative party conference; finally the unbearable arrogance of Norway’s entry That’s How You Write a Song from Alexander Rybak who advised us to “Sing, scubidubi-dab-dab scubidubi-dab-dab”. Never before have I wished to see a Eurovision performer panned in the face with his own violin.

Post #MeToo, Portugal made a statement with four female Eurovision hosts (Filomena Cautela, Sílvia Alberto, Daniela Ruah and Catarina Furtado) which seemed to aggravate Portuguese TV presenter Pedro Fernandes as he announced the voting results of the host country’s jury. “These are MY girls, I love you” he said smarmily, as if they were Charlie’s Angels. “If we win this again, next year there will be four male hosts,” he grinned. “Way to patronise,” quipped Graham Norton. At this point I willed Netta to appear, blast Pedro in the face with “STUPID BOY!” and cluck him into oblivion.

Mild-mannered Cesár Sampson of Austria was in the lead at the end of the jury-voted results with the inoffensive yet forgettable Nobody But You, closely followed by Gaston and his curious footwear. But this was a night when girl power trampled all over male egos.

Unlike the voting of the juries which generally favoured vanilla ballads, it was clear the voting public wanted deeper meaning. In one fell swoop their votes rocketed Non Mi Avete Fatto Niente, a political song from Italy which had languished near the bottom, to a fifth-place finish. And while the public also loved Eleni Fureira, her song lacked any kind of real message: “Ain’t no hidden agenda, What you see is what you get, yeah”.

It was the empowering lyrics of Netta’s song Toy written and composed by Doron Medalie & Stav Beger, that really hit home, bringing Israel an emphatic fourth victory at Eurovision. “Wonder woman, don’t you ever forget, You’re divine and he’s about to regret… I’m not your toy, You stupid boy”. It seemed to speak to anyone who’d ever been at the receiving end of male abuse of power. Netta explained: “It’s an empowerment song for everybody, for everybody who’s been struggling being themselves – struggling with their bosses, with the government, with someone stepping on them.”

Foureira generously said of Netta’s victory: “She deserved it completely. She deserves to win so I’m very happy with the results.” It was deeply satisfying to see the pompous winner of last year’s Eurovision, Salvador Sobral, handing over the trophy to Netta through gritted teeth, having previously derided her song as “horrible”. Netta, accepting her trophy, said graciously: “I’m so happy, thank you for choosing difference. Thank you for celebrating diversity!”

Not since Rufus Thomas did the Funky Chicken and The Tweets sang the Birdie Song has poultry pop made such an impact. But this bird has attitude. And it’s glorious to watch.