There was a huge shock in store for UK Eurovision entrant SuRie during this year’s live final, when her performance was interrupted by a stage invader.

SuRie was in the middle of performing her track, ‘Storm’, on Saturday night (12 May), when a man ran on stage, grabbing her microphone and shouting a message referring to the “Nazis of the UK media”.

He appeared to shout: “For the Nazis of the UK media, we demand freedom.” 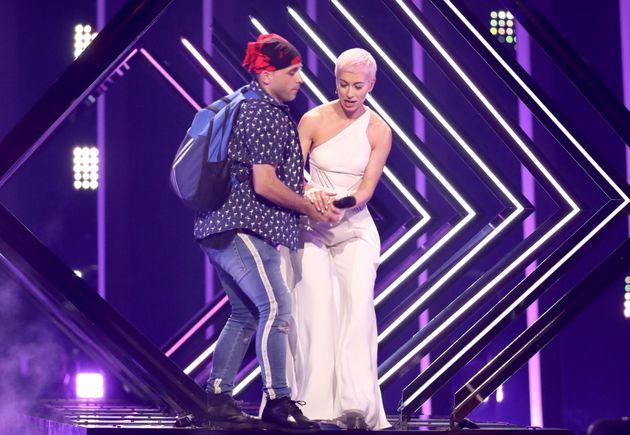 However, he was unable to complete his protest as he was then removed from the stage by security.

SuRie confusedly looked on as the scene played out, while the audience continued to sing the lyrics of her song along with the backing track. She then got her microphone back and made it to the end of her song.

As is standard procedure in incidents like this, Eurovision offered SuRie the chance to perform a second time at the end of the show, though she declined the opportunity.

Commentator Graham Norton explained: “The decision was left to SuRie and she decided she did not want to perform again, and who can blame her, she has absolutely nothing left to prove.”

A Eurovision spokesperson also revealed shortly afterwards that the stage invader had been taken “into police custody”.

A statement from the EBU: pic.twitter.com/qiH1Df0MgW

Up until the moment of the stage invasion, SuRie’s performance had been among the strongest of the night, with the audience clapping and singing along with ‘Storm’.

Her perseverance and strength got a strong reaction from Eurovision viewers, who praised the singer for the way she handled the situation.

The way SuRie handled that will go down in the history books for one of the most iconic moments at Eurovision, very few people could do what she did after that. I would be afraid for my life after that

What a performance by @surieofficial – she must been terrified by the stage invader who is thought to have said “For the Nazis of the UK media, we demand freedom."
The incident left the UK contestant without a mic for around 20 seconds, before it was replaced. #eurovisionpic.twitter.com/aSRrlAi3KP

So much love for Surie right now. She handled that with grace. Proud, proud, proud #uk#eurovision

SuRie's raw power and strength during the end of her song is why I watch this contest. One person and a mic can inspire the world. She's certainly inspired me to be stronger no matter what! What a legend! #Eurovision

SuRie looked so shaken omg, but she handled it brilliantly with some gorgeous vocals at the end #Eurovision

She handled that so professionally #Surie#GBR#Eurovisionpic.twitter.com/stv6VwPvv0

Drama at #Eurovision as somebody Storms the stage. Brilliantly handled by #SuRie we might win it now! It wasn’t Lee Nelson again was it? #ESC2018

That was really scary. SuRie handled it like a total star #Eurovision

SuRie what a heroine. Amazing performance. Such strength and courage to continue. Britain is so proud of you. #SuRie#Eurovision#Eurovision2018

@surieofficial did a sensational job to keep going and remain professional during the stage invasion ?????? she sowed so much strength and determination to carry on! Go Surie #Eurovision#Eurovision2018

SuRie’s bounceback from that disgusting protester was incredible. Hope she’s ok and hope Europe give her the votes she deserves! #Eurovision2018

Well you guys need to sack your security team!! What an absolute disgrace! Surie was incredible to carry on after that, she made the UK proud!! #Eurovision

Graham also heaped praise on the way SuRie handled herself, noting: “SuRie coped incredibly well, I can’t stress enough what a brilliant job she did. She must have been terrified in that moment.”

A post on the official UK Eurovision Twitter page noted shortly afterwards: “Just to confirm SuRie is ok. More news when we get it.”

Just to confirm SuRie is ok. More news when we get it. #Eurovision

HuffPost UK spoke to SuRie shortly before she headed to Lisbon for the Eurovision live shows, during which she observed of her then-upcoming performance: “Everything that is within my power, I will do my very best with, and anything beyond my control, it’s my job to just deal with it.”

Read the rest of our SuRie interview here.