Jeremy Clarkson brought ITV’s ’Who Wants To Be A Millionaire?′ reboot to a close in spectacular fashion on Friday (11 May) night, with a blunder worthy of a spot in the TV history books.

The former ‘Top Gear’ host got over-confident – we know, how very unlike him… – and told contestant Alan had got the £16,000 question right, when he’d actually opted for the wrong answer.

Alan was facing the question, ’What type of wild animal is an ibex?’, and as he pondered the four possibilities – goat, pig, hare or deer – a smug Clarkson told him: “I’m going to really annoy you now. I know the answer.”

OH DEER OH DEER!! That moment when you definitely know the answer, except you don't.
??? #Awks
?????#Millionaire@MillionaireUKpic.twitter.com/vRja4sgy1L

By this point, Alan had used all of his lifelines (including Ask The Host), but decided to give it a go anyway and went for option D, deer.

“I’m not even going to look at the screen,” Clarkson then said, as Alan’s answer was illuminated. “That’s the correct answer.”

The screen Clarkson wasn’t looking at then revealed the answer was actually goat, but it was too late – the audience were clapping and Alex had a gigantic smile on his face. 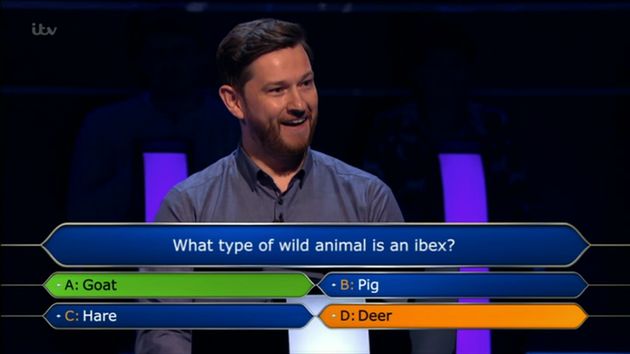 After what was just a second or two, but felt like hours, Clarkson and Alex noticed the mistake, which left the host stunned as he was forced to address the blunder.

Awkward barely even covers it:

Omg Jeremy Clarkson nooooo cringing so much at who wants to be a millionaire ??????

Jeremy Clarkson cockily telling a contestant he’d won £32k by being so confident he didn’t have to look at the screen for the answer – and then realising he was wrong! ?? What a prat. You’d never get Tarrant making such a fk-up! #Millionaire

Omg Who Wants To Be A Millionaire imagine you think you've won 16 grand when you actually haven't ?????? love Jeremy Clarkson

Stick to the motor shows Clarkson – still, a monumentally hilarious gaff, would have been even more hysterical if he’d asked you and you convinced him of the wrong answer.
Let’s make a series of this hilarious quizzical nonsense!
?????@JeremyClarksonhttps://t.co/uE0ifZL2XW

@JeremyClarkson last nights millionaire was brilliant with your deer/goat cock up you’ve certainly brought something new to the show ?

The Ask A Host lifeline was one of two changes implemented for the special week of new episodes, but Clarkson hasn’t been a huge help to the players.

He succeeded in helping someone with a cricket question in episode one but earlier this week, could not pull it out of the bag when attempting to answer an art question.

ITV rebooted ‘Who Wants To Be A Millionaire?’ to celebrate the show’s anniversary but fans are now calling for a more permanent return.