When Prince Harry and Meghan Markle tie the knot in a thoroughly British royal wedding, the American actress might be in for a few surprises.

Not only will Meghan have to get used to being a member of the British royal family, but will have to familiarise herself with all the good, bad, and ugly quirks of classic UK weddings.

Every wedding is different, but for anyone not familiar, here are 20 things you need to know about the more traditional shindigs.

We hope Meghan’s found time to have someone to teach her the Macarena.

In Britain, we don’t have bachelor and bachelorette parties. Instead they are called ‘hen dos’ (for women) and ‘stag parties’ (for men) and normally consist of cheap flights to a European city with lots of alcohol and terrible fancy dress.

2. You can never be sure it won’t rain, regardless of season.

We all know that our island isn’t blessed with the world’s best weather, meaning that even planning your wedding for the summer months doesn’t necessarily mean it will be dry. Planning a wedding always involves making plans for rain, with a backup plan for if it rains all over that nice outdoor spot you had earmarked for the canapés.

3. It is perfectly acceptable to have two ‘tiers’ of guests.

First and foremost this is a way to help keep the costs down. With so many people to invite to a wedding, but such a tight budget, it helps to be able to invite some people to the ‘day bit’ where they get served a meal, and have others who are only only in the evening when the dancing and drinking starts.

4. The dress code is all about hats, hats and more hats.

Old-school wedding style in the UK is dominated by the hat (and its cousin the fascinator – a small hat or headpiece that is pinned to your head). Harry and Meghan’s dress code reflects this. In fact hats are so important there is a popular pre-engagement joke where you ask a couple if you should ‘buy a hat yet’ – suggesting a wedding might be in the near future.

Superstition dictates that on her wedding day a bride should have four things on her person for good luck: something old (perhaps from a grandparent or parent), something new (recently bought), something borrowed (not purchased) and something blue (yes, the colour). The 16th century poem continues ‘and a silver sixpence for her shoe’ so if you see a small coin somewhere in the celebrations, it’s meant to be there.

6. The groom and his party sometimes wear morning suits and top hats.

It isn’t just the women in the bridal party who go in for big hats, in some UK weddings it is still seen as the norm for men to go for top hats, tails and waistcoats. You won’t see a tuxedo here. The term ‘morning’ comes from the fact that the suit should traditionally only be worn to events that start before 6pm.

7. Some men choose to wear a kilt.

If male guests (or the groom) have a Scottish connection, they might wear a kilt. Although some people say you shouldn’t wear them outside of Scotland, people regularly do. We cannot confirm, however, if they follow the tradition of wearing nothing underneath the kilt…

8. Lots of people get married in religious venues even if they don’t go the rest of the year.

Unlike other places around the world, in England it is the location (not the person) who is licensed to legally perform a marriage. So you have to be in a licensed venue. This means that lots of people who are not religious will have their ceremony in a church (most commonly in the Church of England). Churches are also normally very picturesque, so that’s a plus.

9. Wedding ceremonies tend to start much earlier in the day than elsewhere in the world.

To Brits the idea of having a wedding ceremony start at 6pm seems odd (how do you fit all the drinking in?) as we commonly have the ceremony around at midday or one o’clock. In keeping, Meghan and Harry are having their ceremony at 12midday.

10. The groom isn’t (strictly) allowed to look back when his bride is walking down the aisle.

As we all witnessed when Prince William keep his best forward-facing-stare at his wedding, the groom is meant to keep all eyes on the altar, while the best man whispers encouraging words alongside him. We’re not sure how much this rule is followed in reality: lots of grooms want to see their future partner, if only to ease the nerves.

11. When the couple leave the church they throw confetti.

The tradition of throwing confetti (small pieces of coloured paper or dried flower petals) after a wedding has been around in the UK since pagan times. Originally it was grains of rice thrown to bestow prosperity and fertility. Although in some churches and venues, confetti is now forbidden because the clean-up operation is not great for the environment.

12. The wedding meal is known as the ‘wedding breakfast’.

Okay so we know that you can’t take everything Brits say literally (sorry about the endless sarcasm) but the ‘wedding breakfast’ sounds stupid even to us. This is the name given to the meal (normally late afternoon/early evening) after the ceremony. Historically it would have been the first thing the bride and groom will have eaten all day, hence breakfast. You are likely to be served either a buffet or a fancier version of a roast dinner.

13. Your first drink of the day will have been a Bucks Fizz.

No, not Bucks Fizz the band (a thoroughly British reference there). Bucks Fizz is essentially a British mimosa – an alcoholic drink made up of champagne and orange juice. They are regularly drunk at Christmas and on wedding days. Perfect for when the bride is getting ready.

14. Wedding cake always gets bought, but rarely gets eaten.

Wedding cake in Britain is traditionally a fruit cake covered in white marzipan icing and topped with miniature figurines of the bride and groom, although in recent years people have started branching out. Regardless of the flavour, wedding cake has the unfortunate fate of often being the last item served up after a huge meal, meaning everyone is already full. In that case everyone gets a slice of wedding cake to take away and some couples freeze some to save (gross).

Our American cousins might balk at the idea of essentially roasting the happy couple on the best day of their lives, but for Brits at a wedding the best man’s speech is all about unearthing those embarrassing school/stag night anecdotes for maximum humiliation. Note, by this point everyone is normally very drunk. The speeches can often be very, very long too.

16. Speeches are normally made by the men.

Thankfully this tradition is one that might be on the way out, but in generations gone past, the idea of a woman giving a speech at a wedding was unheard of. Even the bride herself. Normally you have the father of the bride go first, the groom and finally the best man.

17. It is only a proper wedding if the best man and a bridesmaid get together.

In the UK, bridesmaids can vary in age from young girls all the way up to adult women. Ditto on the groom’s side, with pageboys and ushers being at the opposite ends of the age spectrum. If you decide to go for a group of adults, then expect some inter-party relations. It’s not really a proper wedding until someone does something they maybe shouldn’t do.

18. In the evening you will have to dance the Macarena.

No matter how unique you think your wedding is, we can guarantee that you will have had at least three of the same songs on your DJ playlist as every other British couple in history – ‘Macarena’, ‘Saturday Night’ by Whigfield and ‘Come On Eileen’. They all have a dance, and no one quite remembers all the words to any of them. Come on guys, we do this every year.

19. All guests are obliged to join the conga line.

When a conga line starts forming, no one cares how old you are, how tired you are or how drunk you are, you are socially obliged to join the conga line. And keep going until the person in front of you stops. No excuses.

20. The morning after the night before requires a full English.

There is no substitute for the breakfast of wedding champions – the full English fry up. You need sausages, bacon, fried eggs, hash browns, mushrooms, tomatoes, baked beans, fried bread and a large cup of tea. Perfection. Will probably be eaten in a budget hotel or motorway service station. 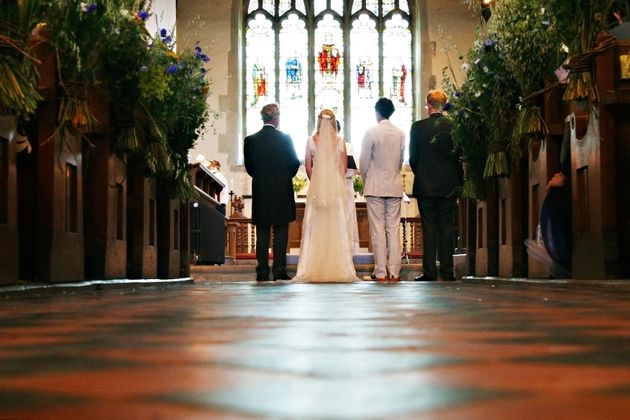