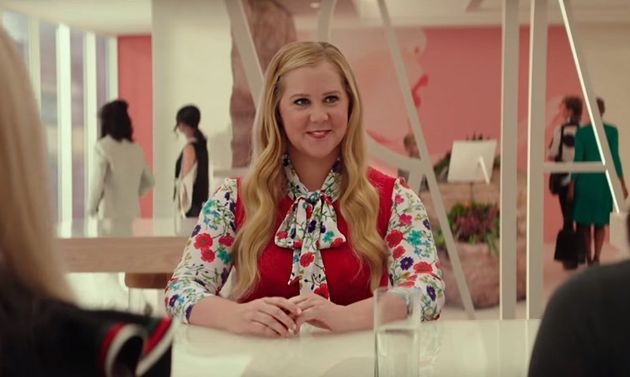 The plot of I Feel Pretty, turns on a bump on the head. Renee – played by American comedian Amy Schumer – falls off her bike in spinning class. Renee is a ‘fat girl’, and supposedly not-pretty. Renee wakes up, looks in the mirror and wrongly believes she is beautiful. And by beautiful what is meant in this film is thin.

She does not wake up with a realisation that she is in fact beautiful. That being skeletally thin is not beautiful, and that slim bodies are not the only beautiful bodies. She does not suddenly realise that our beauty standards are unrealistic and overly demanding and punishing. She does not realise that her curvy, active, lovely body is beautiful, attractive and sexy. She does not reject the tyranny of thin. No, not at all. She wakes up believing that she has a super-model thin body and she meets the thin-ideal.

I Feel Pretty is supposed to tell girls to feel just that. That they should feel pretty. It calls on them to love themselves, discover their talents – Renee is smart, gifted and funny – and to have confidence in who they are. Its aim is to let girls know that success – in getting jobs and boyfriends and feeling happy – is about loving yourself and having self-confidence. Its aims are good.

But it fails to do this, as it is built on the view that Renee is obviously wrong. She is deluded. And it is this core premise – that Renee is wrong to believe she is beautiful – which is supposed to make the film funny. We are supposed to laugh when she says to Naomi Campbell, “modelling is an option to me”, and laugh when she says, “I can eat what I like and still look like this”. This is because the audience is supposed to know that modelling is absolutely not an option for someone who looks like Renee and that no one can eat like that and look pretty. This is the opposite message that the film intends.

I Feel Pretty tries to give a positive message of self-confidence – its heart is in the right place – but as Renee goes back to the gruelling spinning class and pitches her own line of makeup it ultimately tells us that what matters is appearance. Renee succeeds because she believes wrongly that she’s made the appearance grade, not because she’s understood appearance is not what matters. Survey after survey tells us that young women know this, that they know they will be judged more on how they look than what they do or say. In Perfect Me, out this month, I explore just how dominant and demanding the new beauty ideal is, so much so that doing beauty is becoming a moral duty. Telling girls it doesn’t matter isn’t good enough – they know it does. Telling girls they should have more confidence, they should be resilient, puts the pressure back on them. It requires that they as individuals reject and stand up to the beauty myth. It makes it their fault they don’t have confidence, if they buy the beauty myth. This isn’t fair. It’s too much to ask.

We cannot and should not expect young girls to challenge and resist the overwhelming dominance of the beauty ideal all on their own. It takes more than this if we are to change how we view appearance so it is no longer funny that fat women and women of all shapes and sizes can be recognised as beautiful. More is needed than telling girls that ‘personality is what counts’. We need a better response. Sure personality counts, looks alone won’t take you very far. But in our visual and virtual culture looks do count, and young girls know this, and this is what they have to work around. While I Feel Pretty doesn’t succeed in its aims, it might at least let young girls know that they are not alone in their struggle and maybe kick-start thinking about how we can do better, for our girls and for all of us.