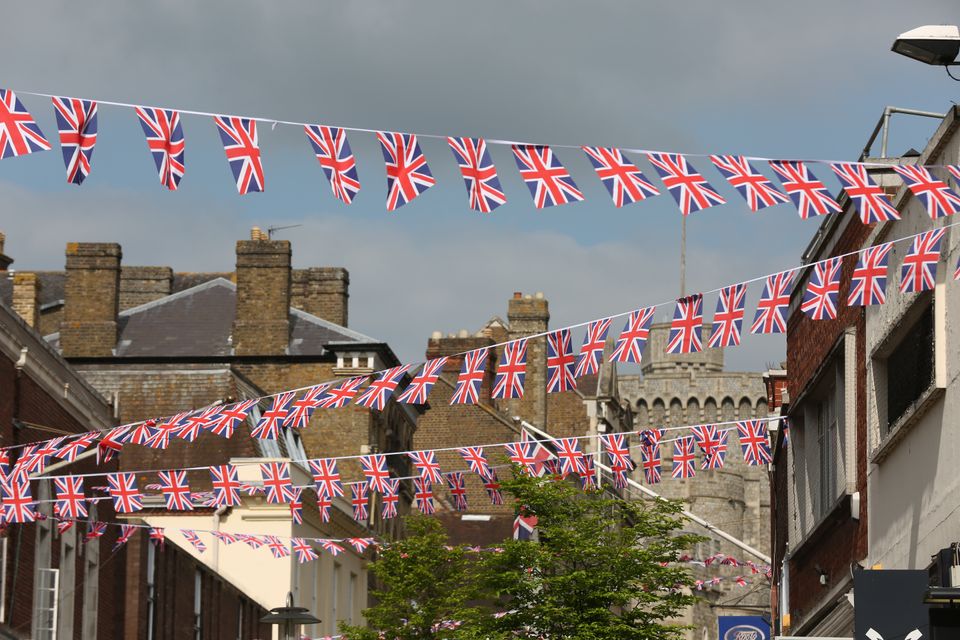 Prince Harry and Meghan Markle are getting married in St George’s Chapel in Windsor Castle on Saturday 19 May.

As the day approaches, here’s a full rundown of what will happen and what to watch out for – whether you’re watching on TV or heading to try to see it in person.

EARLY MORNING: BEFORE THE WEDDING

As the sun (hopefully) rises over Windsor in the early hours of the morning, workers from street cleaners to police will be making final tweaks to plans to accommodate the 100,000 expected to descend on the town.

Harry and his bride-to-be Meghan will also make headlines hours before the phrase “I do” has been uttered or any champagne toasts have been made.

Like his brother and uncles before him, 33-year-old Harry will be granted a peerage by the Queen on his wedding day, with the Duke Of Sussex thought to be the most likely choice. 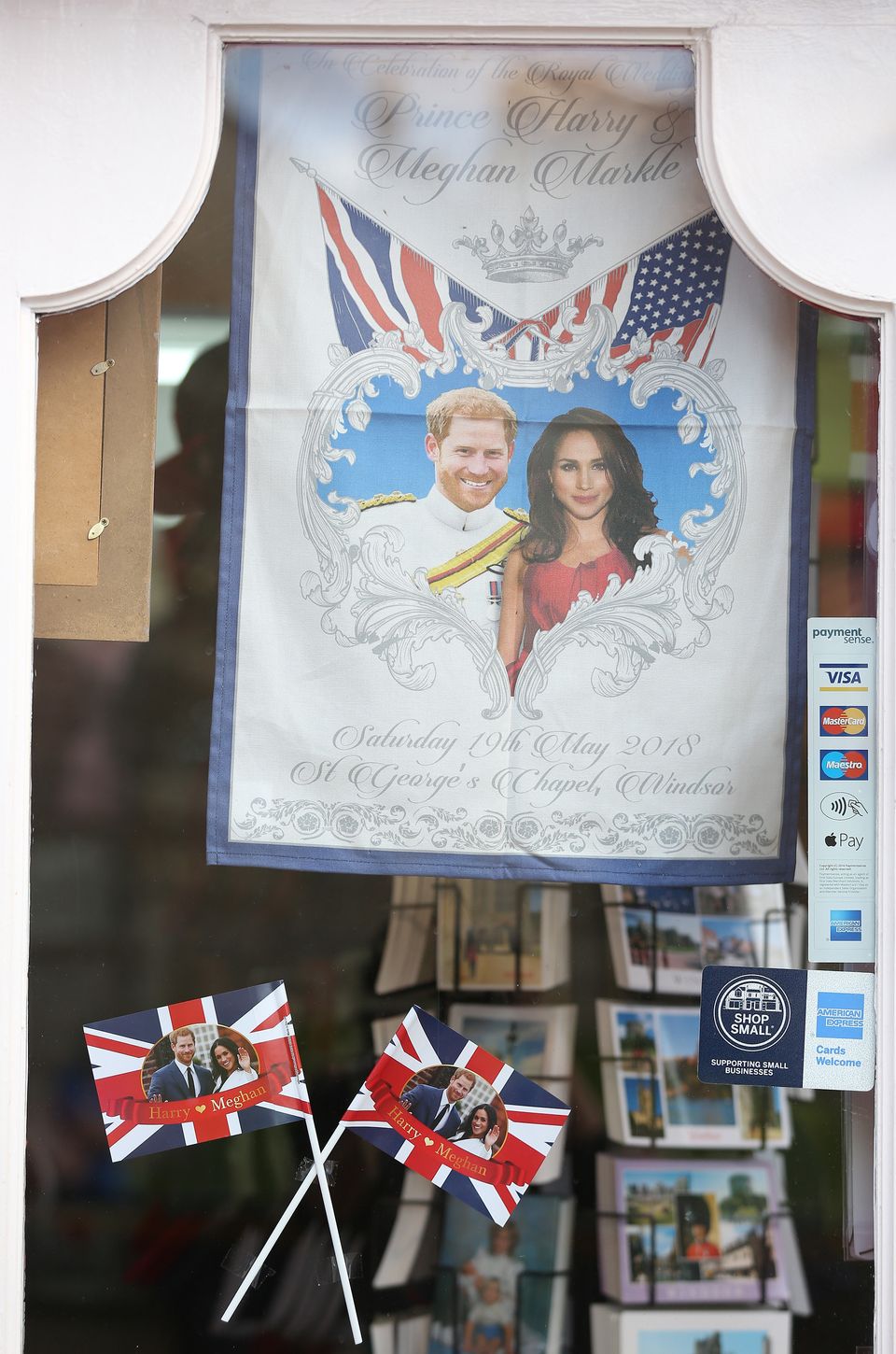 Last held by King George III’s sixth son Prince Augustus Frederick, who was born in 1773, the title would be a historic choice for the royal family, making Meghan the first ever Duchess of Sussex.

“There has not been a previous Duchess of Sussex as neither of the marriages of Prince Augustus Frederick, on whom the title was conferred in 1801, were recognised,” said Lucy Hume, the associate director of Debrett’s, which has published 150 volumes of the peerage. But there are no guarantees. 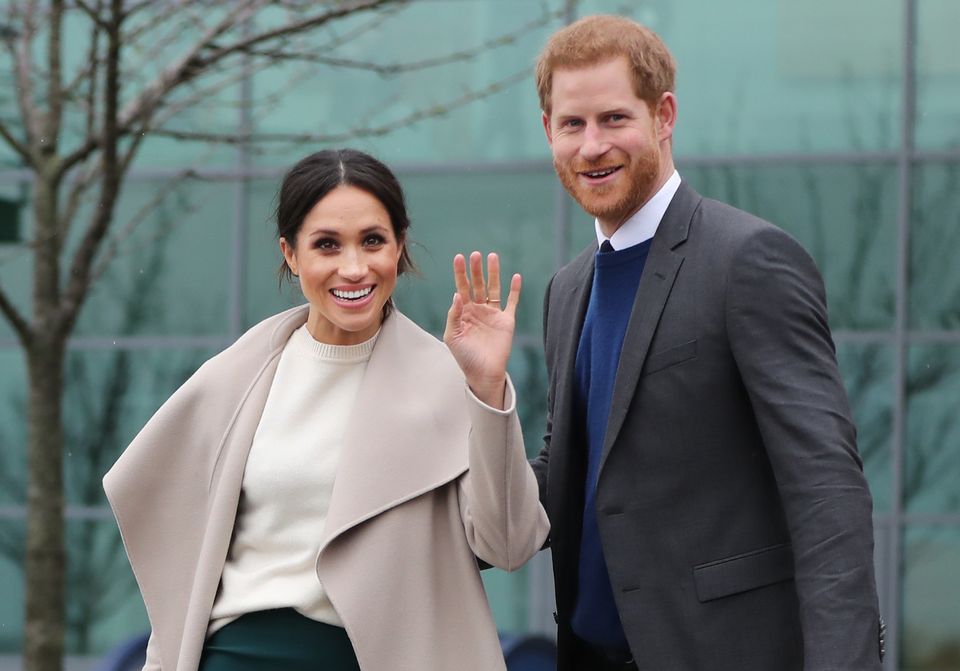 “Although it has been the tradition for male heirs of the sovereign to receive a dukedom on their wedding day, it is not a certainty that Prince Harry will receive one,” she added. His uncle, Prince Edward, was made the Earl of Wessex – a lesser title – when he married.

We don’t know where Meghan and Harry will be getting ready for their big day, but at some point Harry will meet with his brother Prince William to travel to the wedding together, while Meghan will be travelling from her overnight location with her mother Doris Ragland.

The full order of service for the ceremony will also be released at some point during the morning so that members of the public watching on TV on big screens can follow along. 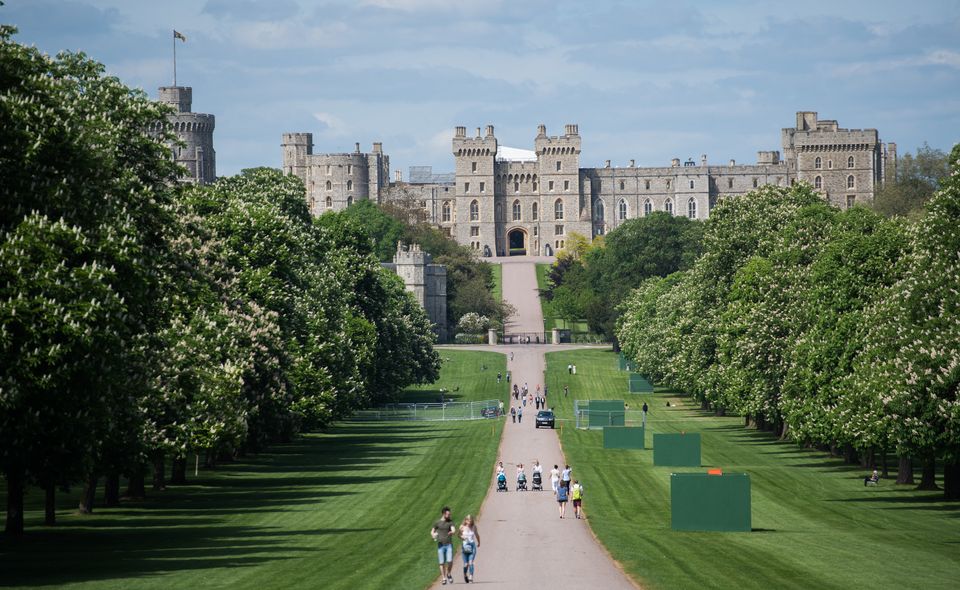 Kensington Palace has said that Harry and Meghan are “keen to make sure that members of the public would have the opportunity to feel part of the celebrations on their wedding day”.

Many royalists are expected to gather and some may try to camp on the street overnight – although Thames Valley Police have banned pop-up tents along the route of the couple’s carriage ride along the Long Walk.

Arrangements have been made for large crowds, including food stalls and facilities outside the castle, big screens showing the wedding and the procession, and live music in Windsor town centre. There will be viewing areas along the carriage procession route, and 140 volunteer stewards to help visitors. 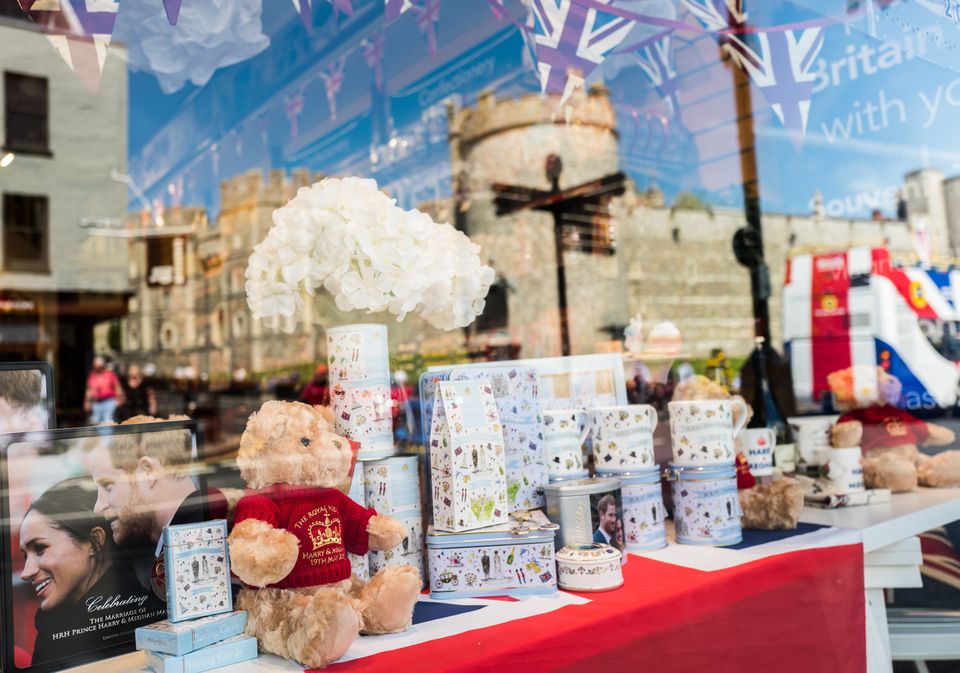 9:30AM: GUESTS BEGIN TO ARRIVE

Guests will begin to arrive at the chapel from around 9.30am, turning Britain into a nation of fashion critics as Harry and Meghan’s nearest and dearest debut their outfits for the big day. (Fingers crossed Beatrice and Eugenie crack out some more incredible head gear.) 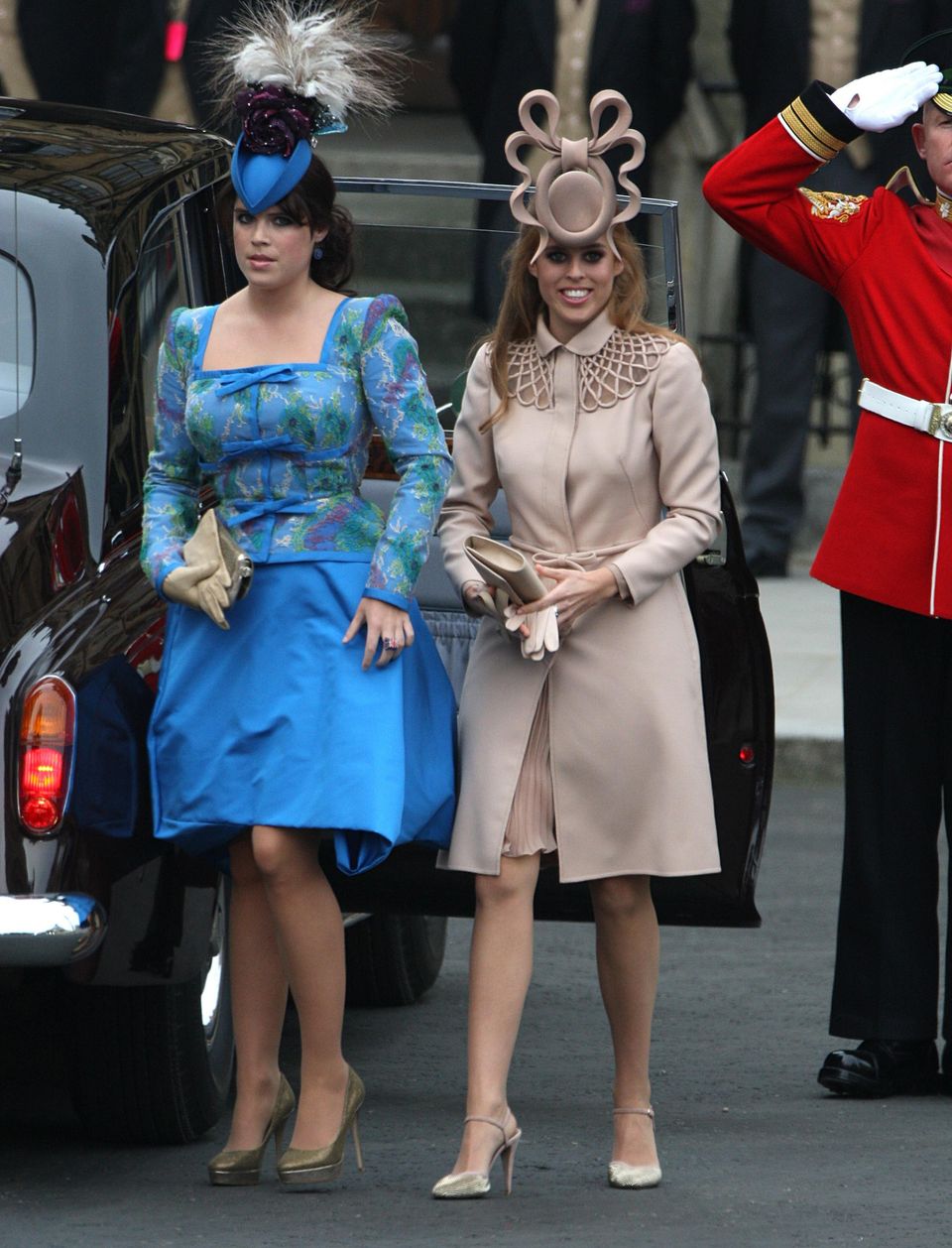 Despite royal experts insisting that the ceremony will be much more personal than the Duke and Duchess of Cambridge’s mammoth 2,000-strong wedding, St George’s Chapel will still play host to around 600 guests on the big day.

Among the congregation will be Princess Diana’s brother and sisters, with Prince Harry “keen to involve his mother’s family in his wedding”. His auntie, Lady Jane Fellowes, is set to give a reading during the ceremony.

“It’s incredibly important for Harry that Princess Diana is remembered at his wedding,” says royal commentator Claudia Joseph. “He has chosen a bride who bears a strong resemblance to her, both as a fashion icon and a humanitarian. 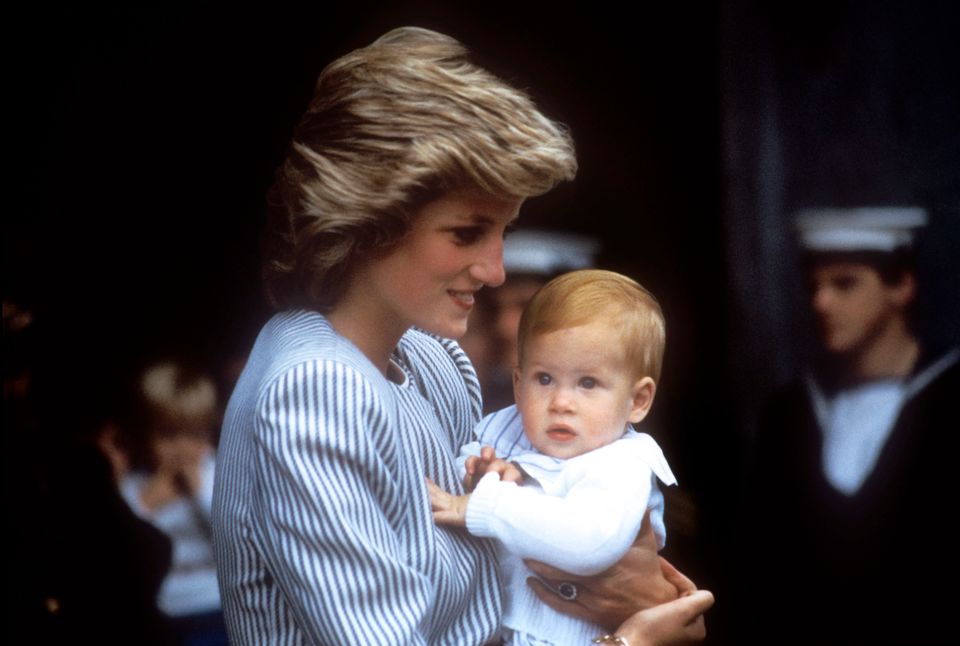 “That is why he designed Meghan’s engagement ring around two of Diana’s diamonds and has invited all three of her siblings to his wedding.”

Notably missing from the guest list, however, will be Theresa May and Donald Trump – the bride and groom decided against inviting political leaders, saying they were “not required” at the wedding. (To be fair, imagine what a nightmare the seating plan would be.)

But, as with all royal events there will still be a fair amount of pomp and ceremony. 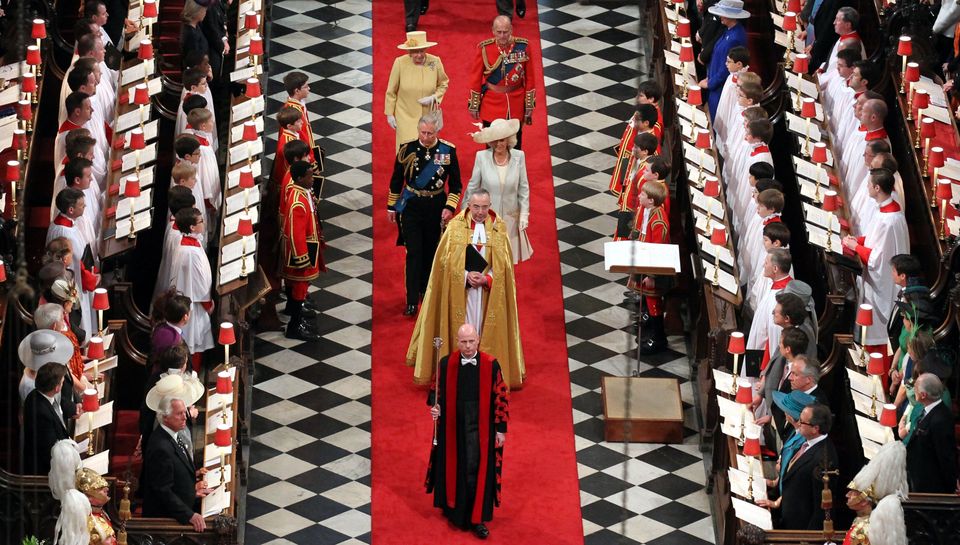 At William and Kate’s 2011 nuptials, the Queen and the Duke of Edinburgh – joined by Charles and Camilla – were the last guests to arrive before the bride and her party, explained former Debrett’s etiquette tutor Jo Bryant.

Their entrance into Westminster Abbey was heralded by fanfare, with guests instructed to rise and “remain standing” until the monarch had taken her seat. “It is understood that guests were asked to bow or curtsy as the Queen walked through,” Bryant said. As Harry and Meghan’s wedding being led by “tradition” according to Kensington Palace, the same format could be be true of theirs.

The royals are expected to arrive from 11.20am. Fans will be eagerly watching for a glimpse of the new royal baby, Prince Louis, when the Duchess of Cambridge arrives.

Between the appearance of the first eager guests and the Queen’s possible procession, Prince Harry is expected to enter the church at 11.15am. In a move away from royal tradition, he will be joined by his older brother Prince William as best man.

“In the past, royal grooms have been allowed to choose two supporters – the equivalent of two best men,” explained long-standing royal commentator Richard Fitzwilliams. 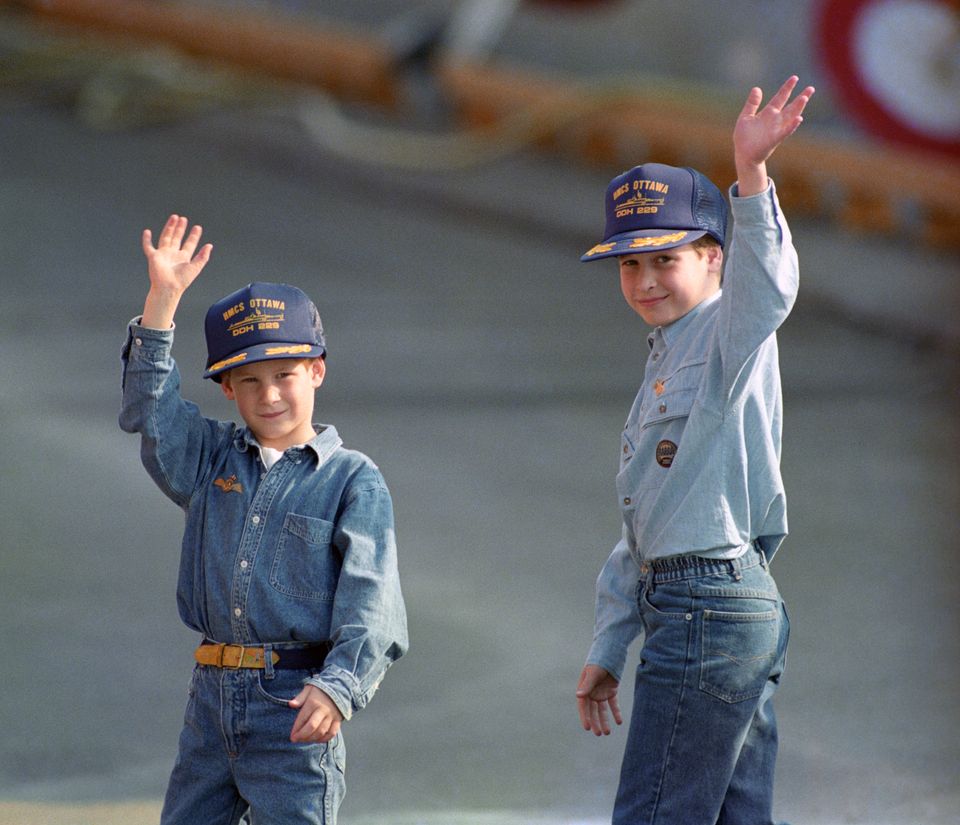 “When Prince Charles married Diana in St Paul’s, he had his brothers Edward and Andrew.”

The Duke of Cambridge is reportedly “honoured” to be taking on the role of his little brother’s right-hand-man – so much so that the 35-year-old, who has been president of the Football Association for the past 12 years, is expected to miss the FA cup final, which falls on the same day.

The pair are set to arrive on foot and enter via the West Steps, so that they can greet supporters gathered in the grounds.

And then the moment we have all been waiting for – Meghan will arrive and give the world what is most likely its first glimpse of the wedding dress that has already inspired hundreds of column inches.

With the designer still unknown, fashionistas have speculated Australian duo Tamara Ralph and Michael Russo could have been picked to make Meghan’s dress, with Erdem considered a close second. 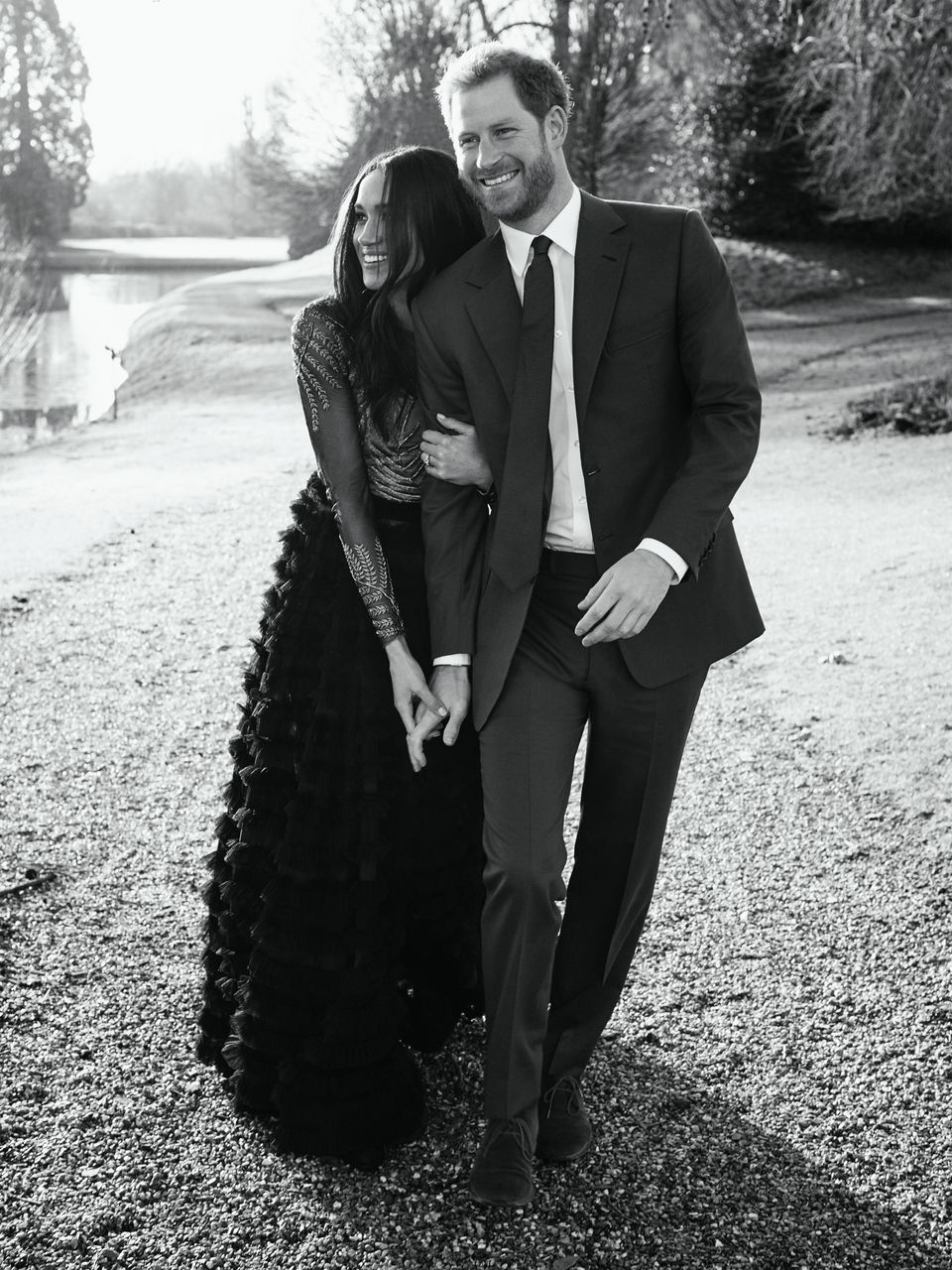 Having travelled to Windsor Castle with her mother Doria Ragland, Meghan will be walked down the aisle by her father Thomas, an Emmy-winning lighting director. Meghan once said her father was proud of her successes as an actress “above all people”.

But notably missing from the bridal party will be a maid-of-honour, with the bride reportedly unable to choose between her “very close-knit group of friends”.

Instead, all of her bridesmaids and pageboys will be children, with the youngest heirs to the throne expected to be given a starring role. “It is thought very likely that George and Charlotte will be pageboy and bridesmaid,” Fitzwilliams said. 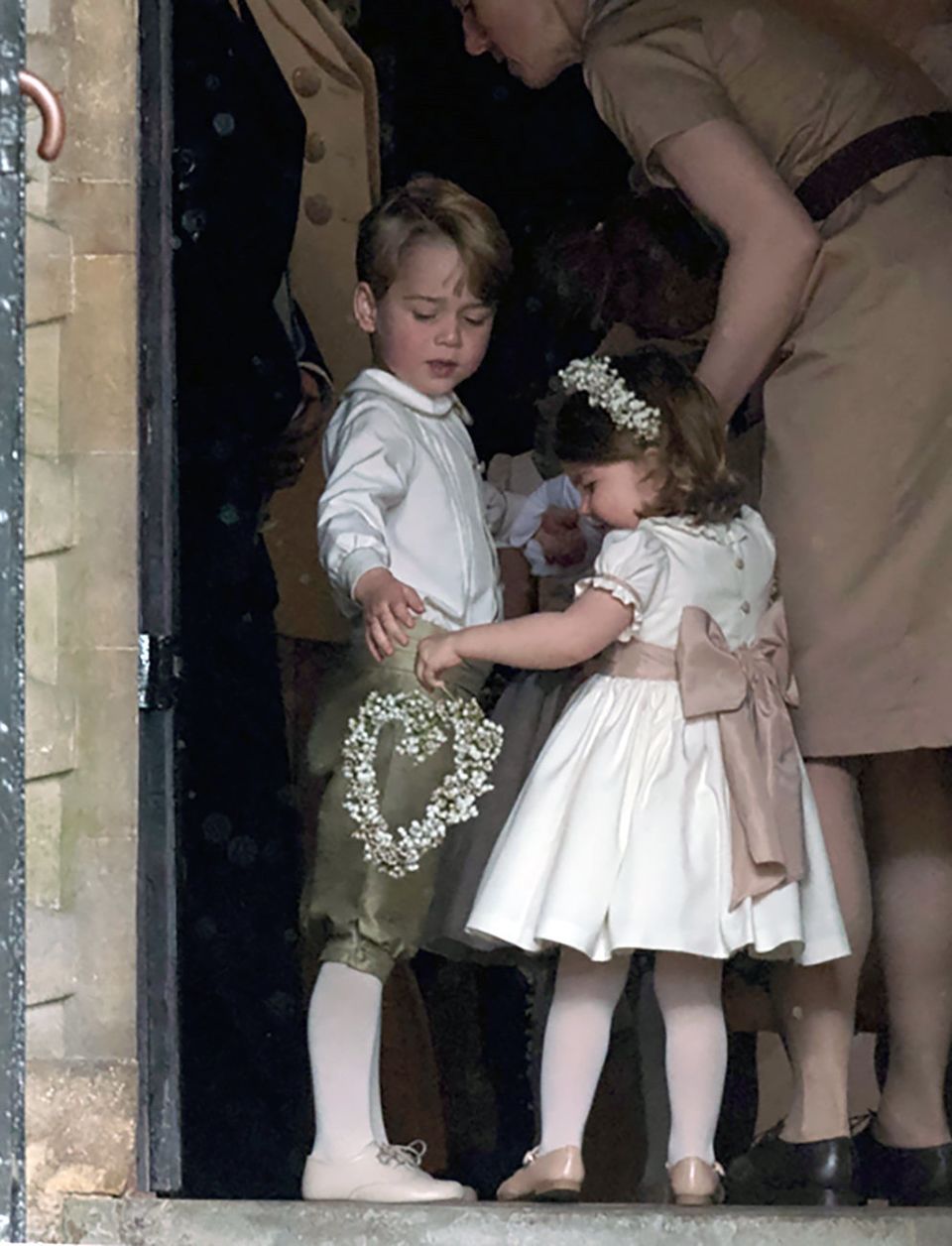 The adorable pair stole the show at their aunt Pippa Middleton’s wedding last summer as part of her bridal party – and only had to be told off once for reportedly stepping on her bespoke gown.

Save for a fashionably late entrance from the bride or groom, the ceremony will begin at 12pm sharp in St George’s chapel, according to Kensington Palace.

While the Dean of Windsor will conduct the service, it is the Archbishop of Canterbury Justin Welby – who reportedly baptised Meghan in a secret service in March – who will officiate the couple’s vows.

Like Princess Diana and the Duchess of Cambridge before her, Meghan is unlikely to include the phrase “obey” in her vows, says Joseph, who published a book about Kate Middleton in 2010.

“I am sure Meghan will omit the word from her wedding vows,” she said. “Not only is it very old-fashioned nowadays, but Meghan is a strong feminist and will want an equal partnership with Prince Harry.” 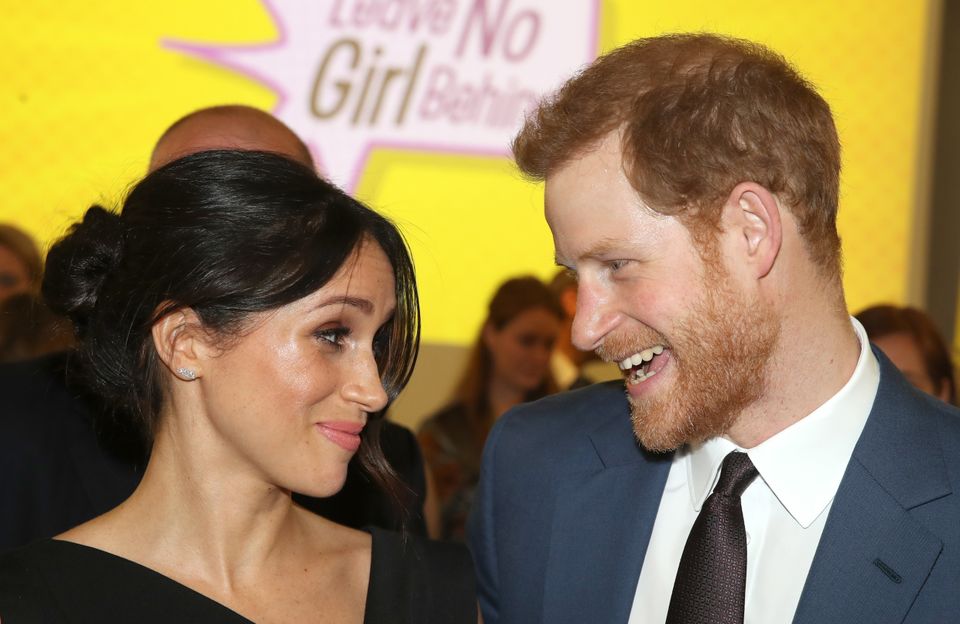 The exchanging of the rings, however, is likely to be a much more traditional affair. For 95 years, members of the royal family have upheld a custom that stretches back to the wedding of the future King George VI and Elizabeth Bowes-Lyon, whose wedding ring was crafted from gold gifted to the monarchy from Clogau St David’s gold mine in Wales.

Gold from the same nugget was then used to create the wedding bands of the Queen, Princess Margaret, Princess Anne and Princess Diana. While officials refused to confirm whether Kate Middleton’s ring came from the same source, both she and the Duchess of Cornwall wear wedding bands crafted from Welsh gold.

Once the rings have been exchanged and Meghan has officially become a member of the royal family, the newlyweds will leave the chapel, pausing briefly to bow and curtsey to the Queen and to greet 200 charity workers gathered in the church’s cloister.

Waved off by their families from the steps of the chapel, Harry and Meghan will then embark on a horse-drawn carriage ride through Windsor, giving the public the chance to catch a glimpse of them on their big day.

Unlike the Duke and Duchess of Cambridge before them, the couple are not expected to greet the public on the balcony of Buckingham Palace, with the wedding receptions set to take place in Windsor. 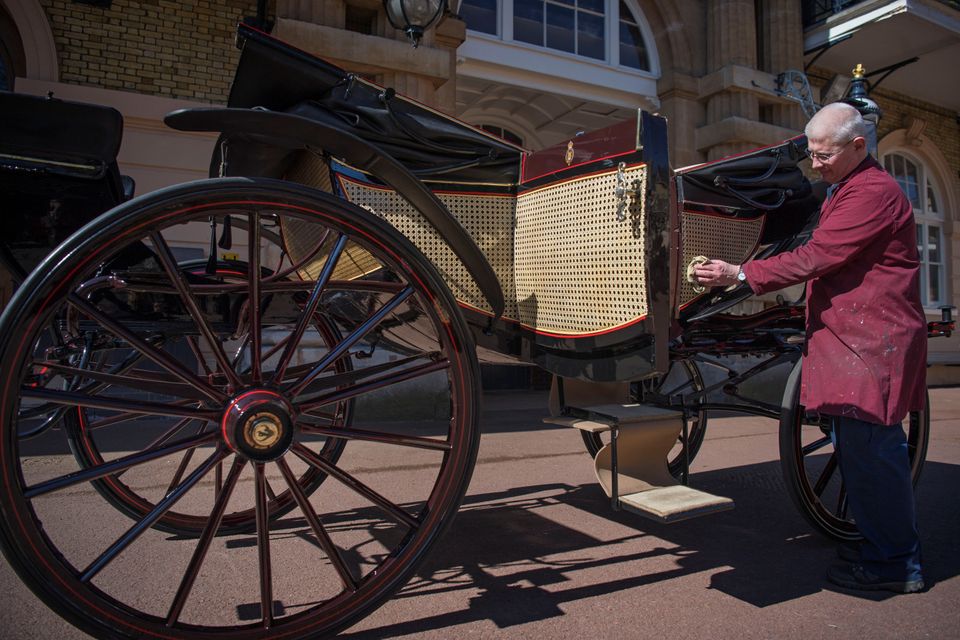 Leaving Windsor Castle via Castle Hill, the historic Ascot Landaus carriage will carry the couple through Windsor Town before returning via the Long Walk.

Thousands of people are set to flock to Windsor for the wedding, with a group of avid royalists planning to camp out in the town a week before the nuptials.

AFTERNOON AND EVENING: THE RECEPTIONS

As the newlyweds take a tour of Windsor, all 600 of their guests will head to St George’s Hall, a state room in Windsor Castle, where the Queen will host a lunchtime reception for her grandson and his new wife – a formal affair likely to include a sit-down wedding breakfast.

According to UCL food anthropologist Kaori O’Connor, the menu is likely to give a nod to Meghan’s heritage. “She is an interesting character,” O’Connor told HuffPost UK. “She’s known to have food views and practices of an ‘actressy-fringey nature’ and is interested in ‘eating clean’.

“To what extent this is going to turn up in the menu, I don’t know. But you would certainly expect there to be some American element in the food as tribute to her.”

But the guests are sure to be treated to Harry and Meghan’s lemon and elderflower wedding cake, which the couple commissioned from pastry chef Claire Ptak. 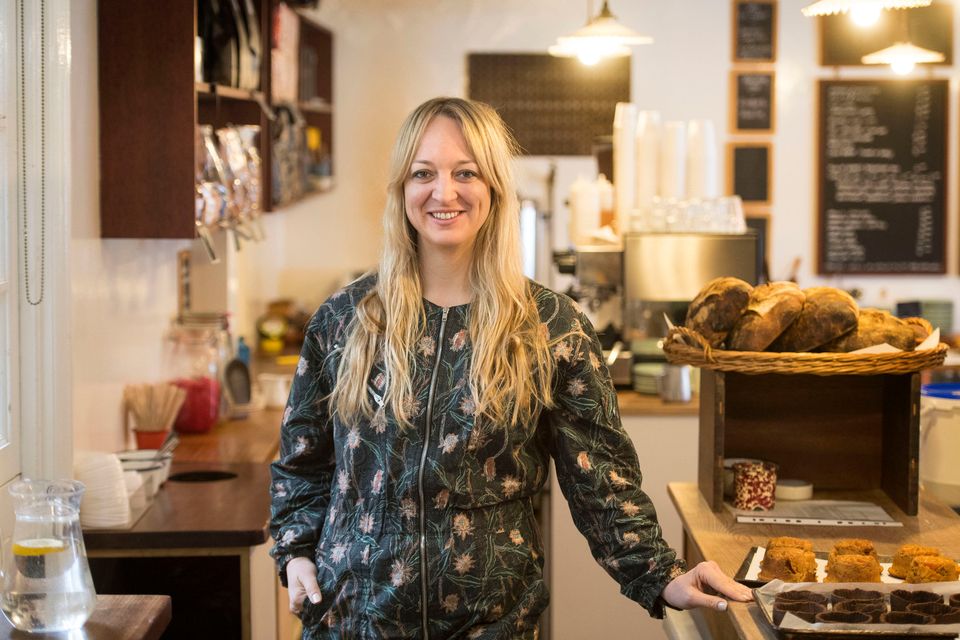 Decorated with buttercream and fresh flowers, the cake is set to be beautiful – but it is unlikely to match the majesty of the creation served at the Queen and Prince Philip’s wedding in 1947.

Nicknamed the “10,000 mile cake” as many of the ingredients had been donated by Australian Girl Guides due to strict post-war food rationing rules in the UK, the four-tier fruit cake was nine-foot tall.

READ MORE: You Are What You Eat – What Royal Wedding Menus Tell Us About The Monarchy

With bellies full, you may expect that to be the end of celebrations – but not for the royal couple. 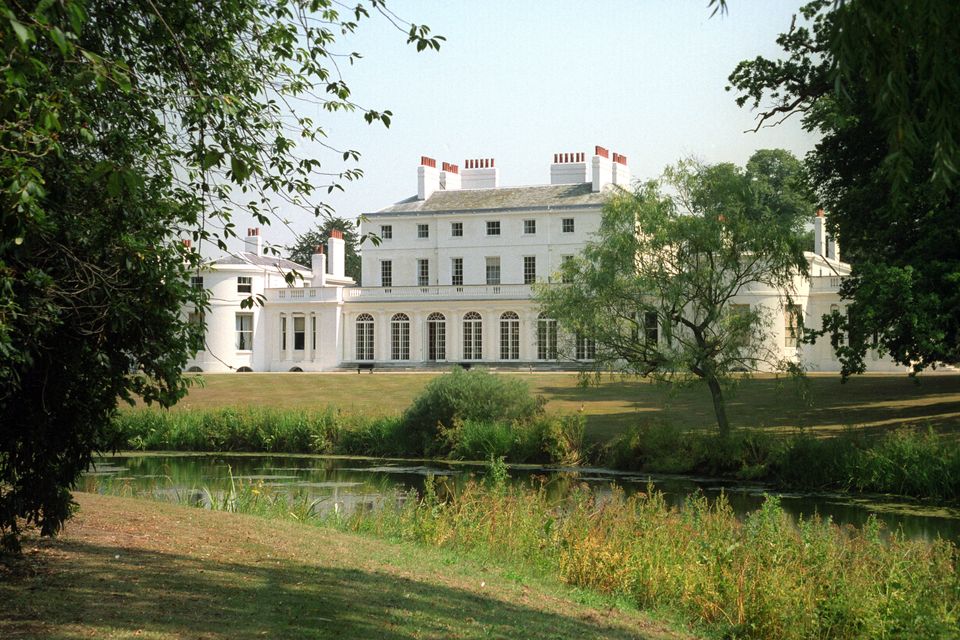 Around 200 of the bride and groom’s family and closest friends will then attend a second evening reception hosted by Prince Charles at Frogmore House – a nearby royal residence where Harry and Meghan posed for their engagement photos.

Let’s just hope the royal family are as quick to pull out the embarrassing dance moves at weddings as the rest of Britain is.