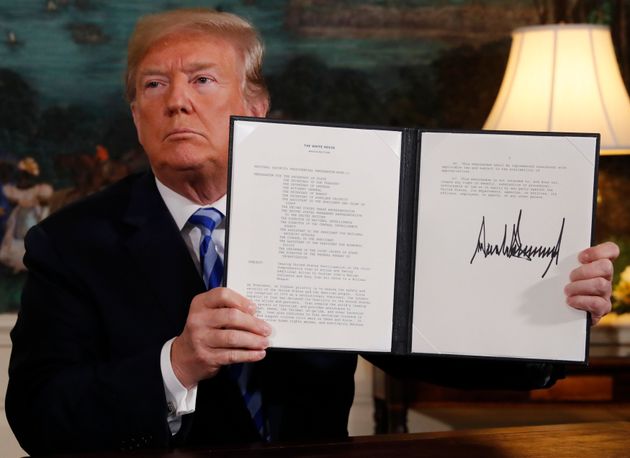 The 2015 Joint Comprehensive Plan of Action (JCPOA) was heralded as a product of an extremely difficult and protracted series of dialogues with Iran that began with the Europeans, and eventually involved the Americans, Russia, the Chinese and the European Union (EU). At that time, President Obama said, “the United States together with the international community has achieved something that decades of animosity has not: a comprehensive long-term deal with Iran that will prevent it from obtaining a nuclear weapon”. On Tuesday, President Trump declined to extend the waivers of American sanctions on Iran’s economy, and therefore to fulfil the waivers required of the 2015 Iran nuclear deal.

The JCPOA was the outcome of the international community’s concern with Iran’s expanding technical capabilities to develop a nuclear capability and to become a nuclear weapons state.  Since the United Nations, the United States and the European Union strict and rigid economic sanctions had been imposed on Iran, before this deal, the sanctions were estimated to have cost Iran tens of billions of dollars a year in lost oil export revenues, while billions in overseas assets were also frozen. These measures are credited with bringing Iran to the negotiating table.

The deal between Iran and the international community had been a focus of Trump’s concern during his election campaign, arguing that the terms were detrimental to America’s interests. He has been repeatedly signalling since January 2018 that he found the waivers distasteful and he would not renew them unless he had from the Europeans a commitment around a number of concerns and deficiencies he saw in the deal, specifically involving Iran’s development of missiles and the inspection regime. It formed part of Trump’s administration aspiration to reimagine American engagement with the Middle East, and to try to take on Tehran directly. Trump had been fixated and determined to upend the Iranian nuclear deal as a way of demonstrating that US is prepared to get tough on Iran.

Many of Trump’s advisors tried to engage and encourage the President to address other issues of concern with respect to Iran’s foreign policy. Similarly, other parties to the Iran nuclear deal desperately tried to convince Trump to avoid disrupting this ground-breaking deal. The decision by Trump to withdraw is further complicated by the fact that Iran was in full compliance with its obligations under the agreement, which was confirmed by the US secretary of defense, James Mattis, in recent congressional testimony and in the State Department’s 2018 Arms Control Compliance Report. and also by the United Nations investigators. This is significant, given that the Iran nuclear deal was signed in the first place to ensure that if Iran tried to cheat, they would get caught.

Trump has been insisting that he had no longer wanted to see the benefit of the Iranian deal, that is in his eyes the opening of Iran’s economy to the world and the increase of trade investments had enabled Iran to increase its reach across the region and caused more destruction and violence directed towards number of American allies, by which he meant Israel and Saudi Arabia. Arguably equally as important in influencing Trump’s decision was the rather disingenuous diplomacy of Israel’s prime minister, Benjamin Netanyahu, and the other major American ally in the region hostile to Iran, Saudi Arabia. Both of the states have their own reasons for wanting to kill off the deal and in so doing reopen a regional crisis that will be more consistent with their interests in the region.

The consequences of this exit will be quite dramatic. For Iran it now means an end to a set of arrangements that had enabled its economy to begin to rebound after a rigorous set of sanctions that were applied during the final year of nuclear crisis. The question that keeps coming back and is echoed by many scholars on nuclear non-proliferation is this: how is America safer now, and what comes next in America’s relationship to Iran?

There is a widespread fear that the decision of the US to walk away from this deal will make it much more difficult to build international coalitions to address future nuclear proliferation challenges. The Trump administration’s decision will leave the United States less secure and more isolated. Trump has also likely created a pathway for Iran to build stronger relations with Europe, Russia, and China to maintain the deal. How will this impact the Israeli-Palestinian conflict, and Israeli and Palestinian security writ large? Israel is already on alert for conflict with Iran.

Concerns about Iran’s past nuclear work will mean little in a scenario where one of the major signatories to the deal, the US, has withdrawn support and there are no longer inspectors in Iran and zero constraints on Iran’s nuclear work. For Europeans, the Chinese and the Russians, exit from this deal by US means a breach of a very valuable and important diplomatic arrangement which was negotiated for many years with the participation of the US.

For many parties around the world, including North Korea who has now been engaged in a process of both diplomacy and signalling with the Trump administration, this exit from the deal would in fact create more difficulties in terms of finding ways to diplomatically resolve the rising tensions and conflicts. On the international level, Trump by walking away from this deal will make the international inspectors move out of Iran and eliminate the strict limits that had been in place on Iran’s nuclear program since the 2015 deal. Trump has now risked driving Iran to not just abandon the nuclear deal but perhaps the entire Non-Proliferation Treaty. Iranian president Hassan Rouhani said that Iran will remain in the nuclear deal, while Iranian state television said Trump’s decision to withdraw was “illegal, illegitimate and undermines international agreements”.

Since the announcement of the withdrawal from Iran nuclear deal by Trump, there have been meetings held by European leaders to salvage the deal and French foreign minister Jean-Yves Le Drian emphasized the fact that “the deal is not dead… there’s an American withdrawal from the deal, but the deal is still there.” With the waivers that were in place, European companies stressed that the sanctions lifting has had a positive impact on trade and economic relations with Iran.

At the same time, European companies will likely respond to an ultimatum from Washington, political analysts are now saying that given the size of the U.S. market, and the power of U.S. banks, European companies would have comparatively little leverage. Neither the world nor the region looks any safer since Trump’s ill-advised decision to abandon a hard-won deal of one of the international communities most intractable issues. What a pity for us all.