After months of preparation, Taylor Swift kicked off her ‘Reputation’ stadium tour on Wednesday (8 May) night, performing to a sell-out crowd in Glendale, Arizona.

More than 59,000 fans were in attendance at the University of Phoenix Stadium for the concert and plenty more – including us! – were eagerly awaiting updates on everything from the setlist to the costumes and stage layout.

So, let’s talk about the most spectacular aspect of the show: the snakes.

Taylor had already revealed that one of her microphones would feature a gold snake design, but what we weren’t expecting were gigantic cobras around the venue and on stage: 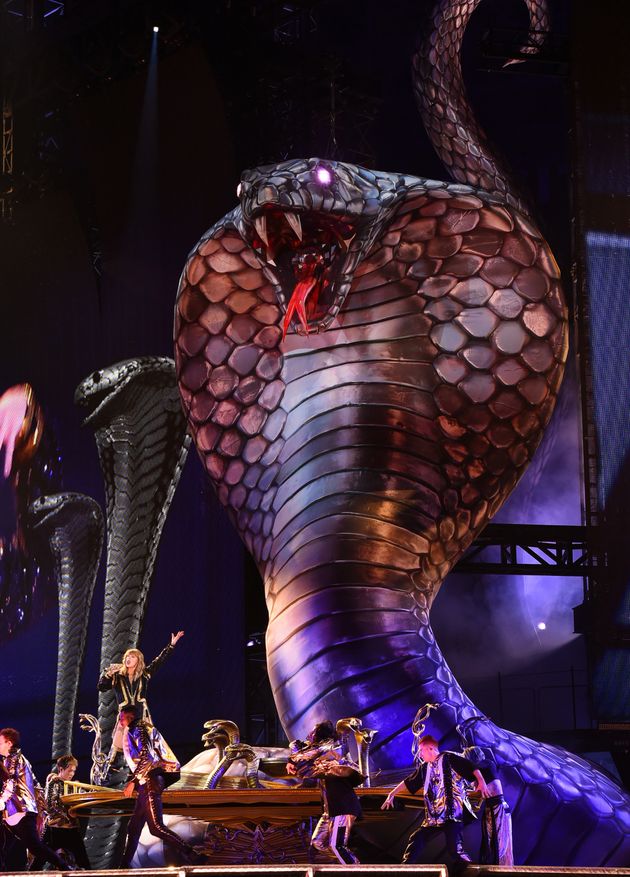 Taylor swift did: that #repTourGlendalepic.twitter.com/l5989RODA6

Welcome to the Snake Kingdom ruled by the Snake Queen, @taylorswift13. pic.twitter.com/YJS6lXSPcy

As if that wasn’t enough, Taylor also flew around the stadium on a giant snake:

During her ‘Reputation’ campaign, Taylor has referenced being called a snake on numerous occasions, flipping the insult on its head and reclaiming it.

Addressing the crowd at Wednesday’s gig, she explained: “A couple of years ago, someone called me a snake on social media and it caught on. And then a lot of people were calling me a lot of things on social media and… And I went through some really low times for a while because of it.

“Sometimes I didn’t know if I was going to get to do this amore. [With] The snakes, I wanted to send a message to you guys that if someone uses name calling to bully you on social media and even if people jump on board with it, it doesn’t have to defeat you. It can strengthen you instead.”

.@taylorswift13 talks to the crowd about the significance of snakes in tonight’s show ? #RepTourGlendale#ReputationStadiumTour#TaylorSwiftpic.twitter.com/oQEFG69R89

The Reputation tour is Taylor’s most ambitious production yet, and the stadium layout has three separate stages, including a 110 foot tall mainstage with a video wall that curves around the floor.

The 24-song setlist – which you can see below – showcases her current album, with a series of fan favourites from the ’1989′ and ‘Red’ days thrown on. Even a few older tracks, including ‘Love Story’ and ‘You Belong With Me’ have made the cut.

The ‘End Game’ singer will perform 53 dates worldwide, with her UK and Ireland dates starting in early June. Camila Cabello and Charli XCX will joining her, as support acts, for the entire tour.

‘I Did Something Bad’

You Belong With Me’

‘Look What You Made Me Do’

‘King Of My Heart’

’Dancing With Our Hands Tied’

‘Call It What You Want’

‘We Are Never Ever Getting Back Together’

‘This Is Why We Can’t Have Nice Things’